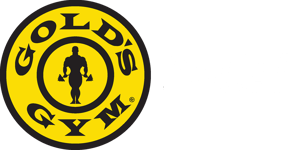 10 Exercises Inspired by the World’s Most Powerful Female Athletes

In honor of Women’s History Month and International Women’s Day, which celebrate the cultural, political, and socioeconomic achievements and contributions of women throughout history and contemporary society, we’re getting workout inspiration from 10 of the world’s most powerful female athletes. These trailblazers (and we know there are many) have expanded the notion of what’s possible while breaking barriers and setting the bar for both men and women in sport.

Widely considered one of the greatest tennis players of all time, Serena Williams has won 23 Grand Slam singles titles, 14 Grand Slam doubles titles with sister Venus, and four Olympic gold medals. During that illustrious career, she’s also been refreshingly real. Williams has been candid about the pressures and frustrations of motherhood after giving birth to her daughter, as well as the discrimination she’s faced on the tennis court.

Lateral movement plays a huge role in tennis. Step to your right side and lower your hips by squatting back and down with your right leg. Make sure to keep your left leg straight. Return to the starting position by pushing up with your right leg. Switch directions and repeat the movement on the other side. Perform in sets on each side. Add weights to increase intensity. 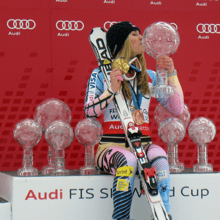 With 82 World Cup victories to her name, Lindsey Vonn is the winningest female skier of all time. She’s also one of six women to have won World Cup races in all five disciplines of alpine skiing. And let’s not forget the three Olympic and seven World Championship medals she racked up before retiring at the age of 34. Now, Vonn is investing in the next generation through her namesake foundation, which provides scholarships and programming to help girls and boys gain confidence, build inclusivity, and discover their grit.

Your quads are probably the hardest working muscles when skiing. Stand with your legs shoulder-width apart, push your hips back, and bend your knees until your thighs are parallel to the floor. Make sure your knees aren’t in front of your toes. If they are, push your hips further back. Stand up and repeat. Perform in sets. For added difficulty, hold a weight in your hands. 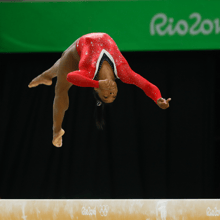 With a combined 32 Olympic and World Championship medals, Simone Biles is considered one of the most dominant gymnasts of all time. At the 2016 Olympics, she won individual gold medals in the all-around, vault, and floor, bronze on balance beam, and gold as part of Team USA. Biles is also a fierce advocate. She's one of the many gymnasts who spoke out about the sexual assault she suffered at the hands of a USA Gymnastics physician. She went on to testify before Congress about the abuse.

Gymnasts require a strong core since almost every gymnastic move relies on the ability to maintain powerful abdominal and lower back muscles. Start in plank position. Pull your right knee into your chest. Switch legs, pulling one knee out and bringing the other knee in. Make sure to keep your hips down. Perform in sets. 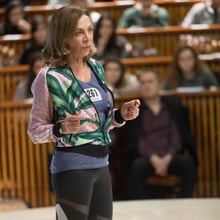 In 1967, when the Boston Marathon was still only open to men, Katherine Switzer signed up to run it under a gender-ambiguous name. Less than two miles into the race, an official tried to tear off her bib, which was captured in a now-iconic photo. Five years after Switzer finished the marathon, women were finally allowed to enter the race marking a crucial step in the fight toward equality in running. Switzer ran the Boston Marathon again in 2017, 50 years after her historic finish. This time surrounded by thousands of other women.

Works all major muscle groups in the legs, improving running power. Stand in front of a bench or box. Place one foot on the bench and push off your rear leg to step up while keeping your body tall and your knee over your ankle on your supporting leg. Bring your trail leg up to a high knee position without touching the bench, then lower it back down to the floor. Repeat in sets on each side. To increase difficulty, add weights in each hand. 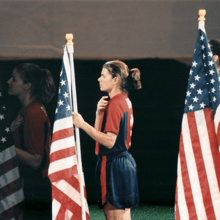 Mia Hamm became the international star of women’s soccer as part of the teams who won the 1991 and 1999 World Cups and the 1996 and 2004 Olympics. During her career, which propelled a women’s sports team to unprecedented levels of media attention, she netted 158 goals in international competition, a record for any player, man or woman, that went unchallenged until 2013. Hamm also started a foundation that, among other things, aims to develop more opportunities for young women in sports.

A conditioning drill that’s comprised of a range of upper body, core, and lower body movements. Stand under a high bar with feet shoulder-width apart. Place both hands on the floor in front of you and quickly kick your legs back into a push-up position. Do a push-up while simultaneously lifting your hips rapidly into a squat position. Stand up and jump to grab the bar. Perform a pull-up. Drop to the starting position and repeat. 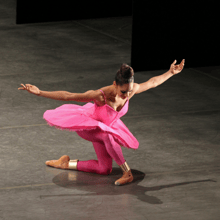 As the first Black female principal dancer at the American Ballet Theatre, Misty Copeland is a trailblazer in the world of professional dance. It’s an achievement that’s impressive in its own right but becomes that much more incredible when you consider Copeland didn’t take up ballet until the age of 13. By the way, that makes her a prodigy. On top of that, she’s an author, actor, diversity advocate, and Prince collaborator, which has also made her a real-life hero to young dancers everywhere.

A low-impact exercise that works your hamstrings, glutes, and core. Lie on the floor with your knees bent and your feet flat on the floor, hip-distance apart. Keep your thighs parallel and your arms extended, palms flat on the floor. Lift your hips off the ground until they're in a neutral position and aligned with the kneecaps. Bring your hips back down with control. Perform in sets. 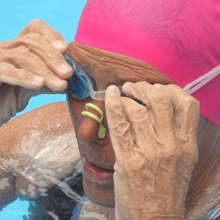 In 2013, 64-year-old Diana Nyad swam unaided from Florida to Cuba. That’s 100 miles, which meant spending two full days in the water without the safety of a shark tank. It’s something no human in history had ever done before and Nyad didn’t complete the swim until her fifth attempt. She’s also been outspoken about the sexual abuse of swimmers at the hands of coaches, which she experienced as a young athlete.

Although smaller than a bicep, the tricep is an important muscle that’s used in all swimming strokes. While seated, take a dumbbell in both hands and put them behind your head. Your elbows should be in line with your back and pointing upwards. Extend the weight above your head. Hold and bring back down to your starting position in a smooth motion. Perform in sets. 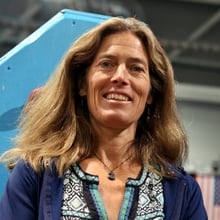 In 1993, Lynn Hill, who is considered one of the best rock climbers in the world, made history. That’s when she became the first person ever, man or woman, to free climb The Nose, a steep, exposed route on Yosemite’s legendary El Capitan. It took her four days, so she came back a year later to repeat the climb in less than 24 hours. No one else attempted to free climb the route for 12 years. Hill’s ascent broke barriers for all climbers and demonstrated the new realms of climbing that were possible on the walls of Yosemite.

The push-ups strengthen your pecs and triceps while the arm rows focus on your lats and biceps. Start in a push-up position with hands on the dumbbells and feet set wide apart. Lower your body in a straight line and after pushing up, row one elbow back, bringing the dumbbell up toward the rib cage. Return the dumbbell to the ground and do another push-up. Row the other elbow back, bringing the dumbbell up toward the opposite rib cage. Maintain a plank position by keeping the body straight from head to toe. Perform in sets.

Six-time Olympic medalist Jackie Joyner-Kersee is considered one of the greatest athletes of all time. At the 1988 Olympics, the track and field superstar became the first athlete to score over 7,000 points in the heptathlon. That record has yet to be broken nearly 35 years later. Joyner-Kersee went on to create the Jackie Joyner-Kersee Youth Center Foundation, which aims to help at-risk children, and, along with Mia Hamm, was one of the cofounders of Athletes for Hope.

Helps improve your speed, running form, leg strength, and flexibility. Stand with your feet hip-width apart. Drive your right knee up as far as you can, then quickly set it back down on the ground. Switch and do the same with your left knee. Perform in timed sets.

Two years after the passage of Title IX in 1972, Pat Summitt became the head coach of the Lady Vols at the University of Tennessee. The silver-medal-winning Olympian went on to lead the team to eight NCAA championship titles and became the first men’s or women’s NCAA basketball coach in history to achieve 1,000 career wins. Despite an Alzheimer's diagnosis, Summitt went on to coach one more season and founded the Pat Summitt Foundation to help find a cure for the disease before passing in 2016.

One of the best exercises to increase explosiveness. Stand with feet shoulder-width apart over a barbell. Keep your back straight as you bend over at the hips and grab the bar with hands just wider than your legs. Stand up until your body is straight and tall. Steadily lower the bar back down to the floor. Repeat.

Gold’s Gym SoCal is an association of separate clubs—click here for info. 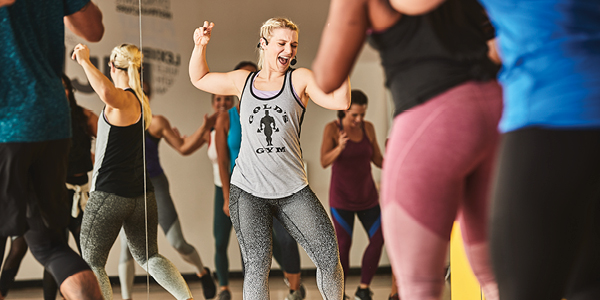 5 Workouts You Can Do In Water